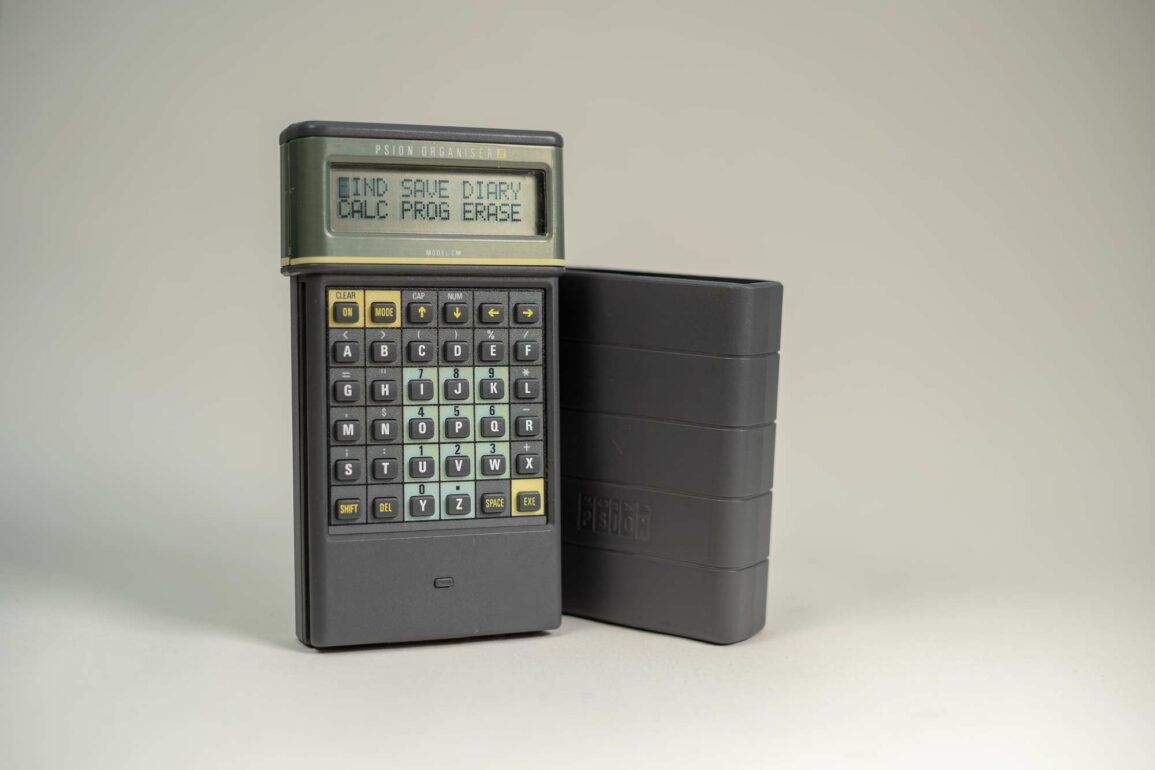 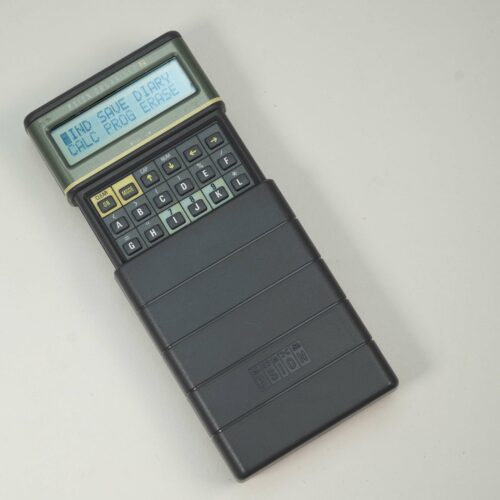 Not (quite) the first pocket computer, but undoubtedly the one that made the most impact when it entered the scene in 1986 and squared up against the iconic Filofax. Would the yuppie choose the sleek leather ring-binder and an elegant fountain pen, or the dark plastic alternative with its dot-matrix display to go with his and suit?

In reality, although the Psion Organiser 2 (or, for convenience, the Psion 2) certainly garnered attention and sales amongst flash businessmen, paving the way for the modern PDA, it was to be its flexibility and sturdy industrial design that drove its success. The much less visible success of commercial work (worry not though, the Psion 3 would address that in 1991). But that’s a story for another day.

Back in 1986 while TV advertising was highlighting the advantages of the Psion 2 for suited-up yuppies, the BASIC-like ‘Organiser Programming Language’ (OPL) and compiler which meant that the device could be simply adapted by organisations for all kinds of altogether new computing tasks. Marks and Spencer staff used them to check the price on shop floors and the UK government bought 3,000 of the machines to perform benefits calculations.

Aiding and abetting all this was the ability to add plug-in modules, including the RS232 “” and assorted DATAPAK-branded memory expansions. PSION made it easy for developers to get hold of hardware specs and, between Psion and third parties, it was possible to equip the Psion 2 with a barcode scanner, a printer, a telephone dialer and even a speech synthesiser.

The Psion 2 in the hand

Perhaps the most impressive thing about the design, which still looks good nearly 40 years later, is the perfection of the sliding cover which comes down to reveal the keyboard or, with an extra tug, can be removed altogether. The keyboard itself – not Querty but perhaps at this stage that didn’t matter – has good travel and the artificial ‘click’ helps make it useable. It must be said that in appearance and sound it seems to owe a lot to the 1981 BBC TV adaptation of The Hitchhiker’s Guide to the Galaxy.

The strict 6 x 6 grid of buttons is a bit weird if you’re used to a D-pad on a TV remote or the cursor keys on a computer, but in that era TV remotes were somewhat less sophisticated (and indeed optional). The ‘Shift’ key in the bottom left allows for access to the special characters and numbers, and the positioning feels natural enough. It’s actually quite easy to get used to coming from a post-iPhone era when you’re always having to look at the buttons on screen! If you’re going to head into lower-case things do get fiddly – you need to press Shift+Up to switch between caps (default) and lower case.

On which subject the screen is good – clearer than many of its age – and thanks to the contrast dial by the side it is easy to keep crisp. It is a bit odd that it uses a character matrix so there are gaps between each 5×8 character grid. This makes it impossible to create a complete graphic (not that the CPU would be keen), though programmers still managed to create playable games.

Is it actually useable?

Operating the device seems almost impossible in the era of touch-screen phones but, in all fairness, it’s still easier than typing your Wi-Fi code into a smart TV setup page. When you slide down the case and power up, you’re presented with a menu (3 items per line) and you use the cursor keys beneath the screen to select the function. The EXE button selects it (yes, short for ‘Execute’ – no one was making computer terminology friendly here). You can choose to:

Key presses are accompanied by a satisfying ‘click’ sound (generated by the device), and using it is not as difficult as you might imagine for obviously a very limited feature set. The all caps screen seems a little aggressive by modern standards, but remember this was the year of the 386 PC so text and cursor interfaces are the norm on the desktop too.

It might seem a limited set of functions, but of the ability to program and extend meant more were on offer. It’s still possible to download these today from collections like Jaap’s Psion II Page (the highlight is Tetris). There is still an active forum, too.

What happened to Psion?

Psion (the PSI stands for Potter Scientific Instruments after founder David Potter, apparently) began with the less flexible (but similar) Psion Organiser. Later versions of the Psion Series 2 gained 2 more lines of display (LZ & LP) . While the II cemented itself in many industrial applications, the consumer market moves fast.

The Psion 3 (and variants) were clamshell personal organisers which were also immensely popular. They were also badged by Acorn, creators of the ARM chip, and the “Archimedes” computers commonly used in UK schools. That’s interesting because Psion’s switched to a 32-bit ARM processor for their Series 5 device (another clamshell, but with very -like keys – see below). Following that, in 1998, Psion would become Symbian, providers of the operating system for Ericsson, Motorola and Nokia. Until Android came along, it was the dominant platform for smart(er) phones.

Psion 4? 6? Nah – apparently even numbers are unlucky. There was a Psion 7 though, which was a good bit bigger – an early , in fact.

The Gemini PDA, by Planet Computers, revives one of the Psion 5’s most loved features – the tactile keyboard. The Gemini smartphone (or Wi-Fi only option) has a 6″ colour screen and the keyboard is produced in a variety of variants and it seems to work for a niche who want a workable keyboard they can fit in their pocket, something the touch-screen world has never quite offered. It’s worth remembering how long people, especially in the business community persisted with the Blackberry, because – people often said – of the tactile keys. (Personally I thought it was because their employers had a contract with Blackberry and they were secretly jealous of my iPhone, but Planet Computers seem to have bet the farm on the literal interpretation).